So have a bad knee.  And two bad ankles.  So how can I run?  How can I be doing the crazy Insanity Workout where you jump around like a kangaroo on meth?

I wrap my knees.  And one elbow, since I got Tennis Elbow in it a few years back and I don’t want a repeat.  And so far its worked fabulously, so I decided to write down what is working for my wife and I.

How bad are my ankles?  Both are tore up from me playing soccer in high school.  Both got rolled and sprained several times, and the tendons/ligaments are all stretched out and jacked.  If I roll my feet around in a circle, they sound like a bowl of Rice Krispies.  I can be walking or running and roll my ankle,  and it doesn’t even hurt or bruise anymore.  That’s just not right.

If I sit down into a squat and then stand up, my right knee sounds like a Snap, Crackle, and Pop are having a heated discussion about the geo-political ramifications of increased Ethanol development and its impact on the third world.  Doing several squats will lead to a sore knee and sometimes even swelling.  The worst injury to my knee was when I was chasing a bad guy through a train yard in a foot pursuit and I stepped in a hole, which led to an ACL sprain.  I usually wear a knee brace now at work to avoid re-injuring it, but its just a $20 Walgreen’s knee brace with side supports on it.

Needless to say, I’m not the best specimen of joint  health.

Before we started the Insanity workout, two very fit friends of mine both recommended that I “wrap” my knees.  We did some research and ended up trying this:

Its not blurry in real life, trust me.

We purchased it at Academy, and I believe it was called “self-grip athletic tape”.  Its a thicker version of what most people call “vet tape”, and medical people call “Coban“.  Its springy and sticks to itself, and not to you.  For wrapping your joints, its a miracle.  It came with a nifty card that showed you how to wrap all the different joints.

After several uses, it begins to lose its “stick”, so we replaced it with a large bulk box of the thinner medical grade stuff, which was about half the cost.  Here is the thinner stuff: 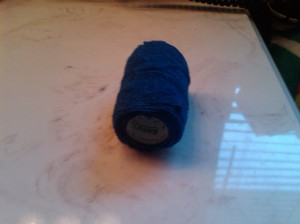 The blue color brings out my eyes.

You have to wrap it a few more times to get the same level of support, but I think it has worked out for us.  Its easier to throw away the cheaper medical stuff when its outlived its usefulness than it is to throw away the athletic stuff.

Here is a picture where I’m trying to show you that the medical stuff is thinner: 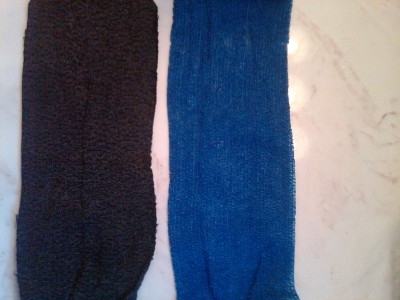 And finally this is a pic of my dead sexy knee wrapped in the tape.  The camera perspective really does not show how short and stubby my leg really is.

The results are good.  I am right over the halfway point of Insanity, and while I am losing my tenuous grip on reality, my knees are giving me no problems at all.  Similarly, my wife is also having zero problems with her knees.  At only a few dollars a roll, its well worth the money to save the wear and tear on your joints.

So, if you have to wrap your joints, do it with some of this stuff.